The goal of this article is to help readers understand the latest #CryptoEthics reading group where we discussed the mechanisms of decentralization/unstoppable code, the positive/negative impacts of them, and the 2nd-order solutions to those issues.

Context: As part of the DCI's initiative to catalyze and steward a field of #CryptoEthics, we're leading a weekly reading group on CryptoEthics. This week we explored the "Negative Ramifications of Decentralization and Unstoppable Code" (see the reading list here). I learn a lot every week when we host these sessions, so I'd thought I'd share these learnings with the world!

The driving questions of this session were:

(Note: This 4-part question structure holds for any given mechanism: why was it created, how does it work, what are its impacts, and what are the 2nd-order actions to maximize societal benefit?)

1. Why do we "implement" decentralization and unstoppable code?

We use decentralization-enabled unstoppable code as a way to "disobey"/exit systems that we see as unjust. This comes back to the MLK quote from the start of this article: "One has not only a legal but a moral responsibility to obey just laws. Conversely, one has a moral responsibility to disobey unjust laws." Unstoppable code allows developers to "disobey" these laws through code.

However, this mechanism (exit through decentralization-enabled unstoppable code) doesn't just allow one to exit only laws, it also allows one to exit any part of Lessig's dot: laws, code, norms, or markets. Let's look at how decentralization-enabled unstoppable code is used to exit each part of Lessig's dot.

2. How do these mechanisms work?

Disobeying Law (with Code): Exit Through A Cat-and-Mouse Game of Decentralization-enabled Unstoppable Code

The best overview of this mechanism comes from John Backus' piece: Resistant protocols: How decentralization evolves.

Backus' macro thesis is this:

In other words, there's a cat-and-mouse game between the law and code:

To disobey code (with code), the primary mechanism is forking. (In contrast with disobeying law, where the mechanism is decentralizing aspects of the protocol). This is because developers aren't trying to "dodge" the law (which forces them to decentralize around it). Instead, they're simply trying to modify code (which they can do by simply forking). Three quick examples below:

In this article we can see how Gab forked Brave in order to disobey "unjust" code.

In the "code exits code" form, exiting is a form of censorship resistance. One additional note: It's unlikely there will be a "cat-and-mouse game" here. But you can imagine a situation where the plugin is so bad for society that something further down the stack (e.g. operating systems) disallow users from downloading Gab's browser. (In this case, Gab could fork the OS, e.g. Linux, to allow users to download their Linux fork + Brave fork in order to download Gab's browser extension.)

As other example, Bitcoin Cash forked Bitcoin. The BCH developers wanted a bigger blocksize but couldn't get it into BTC (through the governance mechanism of "voice"), so they exited by forking Bitcoin to add their desired changes (bigger blocks!).

As a last example, see Ethan Zuckerman's article: Mastodon is big in Japan. The reason why is… uncomfortable. In summary: one can create Twitter-like Mastodon instances with any set of code-based rules. The Japanese folks who shared ロリコン ("lolicon") on Twitter were censored, so they exited to Mastodon instances where they could set their own rules and share lolicon there.

Finally, we can see how one can disobey norms (with code). The best example that we came up for this in the reading group was less "disobeying" norms and more "finding a community of aligned folks." A good example of this is how the LGBTQ+ community used Tumblr (see these articles from The Guardian or The Conversation). In summary: “For the LGBTQA community and other marginalized communities, Tumblr has more of an appeal because other platforms have more censorship built in … It created that safe space for them.” In addition to code-based censorship (of NSFW content) on other platforms, there's also the norms on the platform. e.g. LGBTQ+ folks may have be harassed on a platform like Twitter, so they searched for a place with "safer" norms (on Tumblr).

From the examples above, we can see how code allows users to disobey/exit laws, code, and norms.

(Note: In the reading group we didn't discuss "disobeying markets" with code. Leave a comment below if you have an example of this! [I think the democratized incentives of crypto may be a general example?])

Finally, a quick (non-deep) summary to answer the final two questions of this article. (Note: Thus far I've primarily worked with positive/is arguments. These next two questions are much more about normative/ought arguments.)

3. What are the positive and negative results of these mechanisms?

4. How can we mitigate the negative impacts and amplify the positive impacts?

Thanks to the folks who helped me work through these ideas in the reading group: Basil Halperin, Christine Ross, Nchinda Nchinda, Ellie Immerman, Mariana, etc.

P.S. One final note: I think I'm going to "double down" on CryptoEthics writing (instead of simply following my curiosity, e.g. writing about paradigm / meta x-risk). 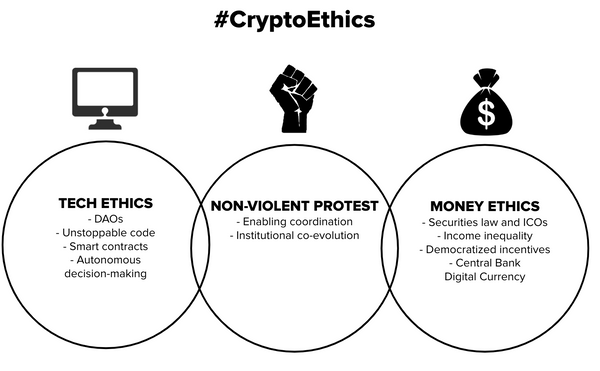 I'm a huge fan of therapy (if you haven't done it yet, you really need to try it!). Thus far, here's my most succinct explanation of it (and its benefits). Therapy is a